Fines for I-9 Violations Increasing 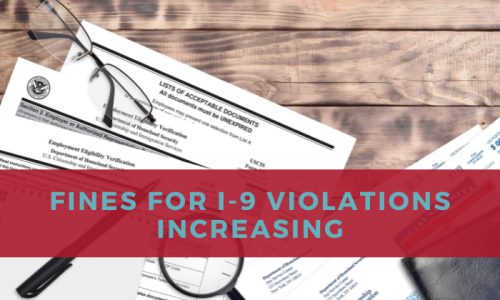 In today’s world, conscientious employers are already paying close attention to how to be compliant with Form I-9 guidelines, but the success of their efforts is more important than ever with fines for I-9 violations increasing. In October 2021, the Department of Homeland Security (DHS) made an annual inflation adjustment for non-compliance penalties.

In an already struggling economy impacting a business’ profit margins, this change is something employers should be aware of, and it ought to ultimately spur them on to be even more diligent in their efforts to be compliant lest it cost them.

Fines for I-9 Violations Increasing

The announcement made by the Department of Homeland Security indicated an increase in penalties due to inflation, but the details of the hike in penalties are something every employer should know. These changes occur in the primary areas of:

In terms of civil paperwork violation penalties, each violation generally falls between a minimum and maximum penalty amount. For instance:

In terms of civil penalties regarding the hiring, recruiting, referral, or retention of unauthorized aliens, there are changes in the minimum and maximum penalties for first, second, third (and additional) offenses:

It is worth noting that these civil penalty fines are awarded per violation, meaning that if an employer is found to have multiple violations, the number of fines will be multiplied as well.

Some of the top Form I-9 mistakes that could potentially lead to civil paperwork violations include:

While tasking employers with being even more diligent in their Form I-9 hiring practices can be an added responsibility, there are resources employers can consult and use to streamline the process.

Fines for I-9 violations are increasing, and this recent change is something employers should take note of and let it serve as a critical reminder of the financial importance of being Form I-9 compliant.

Have New Hires? Ice Audits? Get Compliant Stay Compliant. Ask How We Can Help