What Are the Top Errors People Make on I-9s 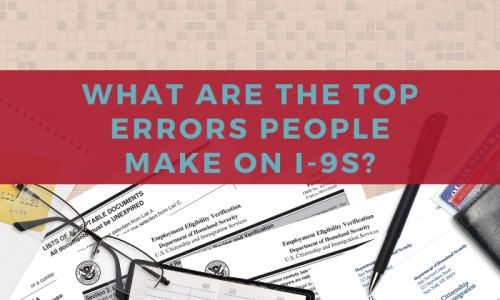 While the Immigration Reform and Control Act has been in place for more than thirty years, it has become a large undertaking for companies to fill out the Form I-9 for new employees. Some corporations can have upwards of a thousand employees spread out across multiple locations, which means more paperwork and potentially more errors. As the need to become more efficient and accurate with how this information is processed grows, it has many employers asking what are the top errors people make on I-9s in an effort to avoid those errors and the associated fines.

Unintentional mistakes can negatively affect an employer’s compliance status. Being aware of the most common pitfalls of filling out the Form I-9 can help employers stay compliant and avoid headaches in the future.

Some of the top errors people make on I-9s include:

It can be easy for an employer to glance at this list and say they would never make mistakes such as these, but the reality is that the process can become overwhelming when handling forms for multiple employees amidst other time-consuming responsibilities.

Let’s look at each of the items listed above in more detail.

Not Properly Training Staff On Form I-9 Protocol

Many of the mistakes listed above can be largely avoided if employers simply take the time to properly train and educate staff on administering, processing, and maintaining a Form I-9. An employer who has a thorough understanding of what is needed in each section of the form and the corresponding timeline is better equipped to complete the process accurately and on time.

Deadlines are an integral part of the form, with each of the three sections having its own. Failure to complete a section by its documented deadline is grounds for compliance issues that can result in violations and punitive consequences. It is worth noting that there can be multiple violations for one employee if multiple deadlines are missed, and if multiplying that by a dozen employees, fines can add up quickly and negatively impact a company’s bottom line.

Performing reverification actions is a critical step in compliance when employees have a name change, share only a receipt for a lost or stolen List B or C document or when an employee’s work authorization document is temporary and has a limited validity period. All of these types of situations require the employer track and take timely action to update the employee’s Form I-9 using Section 3. The key to reverification for employment authorization is to review and update the employee’s new document(s) before the expiration date of the current version of the listed document. It is considered unlawful to continue employing an individual who is without proof of current employment authorization, and it can negatively impact Form I-9 compliance.

Using An Old Version of the Form I-9

While it is not done often, there are typically updates to the Form I-9 every few years, which requires a new version to be used instead of the old version. This type of change is announced well in advance and circulated to the human resource industry. Employers should regularly check with the U.S. Citizenship and Immigration Services I-9 Central website to ensure they are using the most current version of the form.

Signatures are required on the Form I-9 whether they are tangible or electronic. A missing signature from an employee or employer regarding attestation or another matter could result in a violation affecting compliance.

The Form I-9 is designed to confirm an individual’s identity as well as their authorization to work within the U.S. Every piece of information the form requires is essential to accomplishing this goal. A blank or incomplete field on an otherwise completed Form I-9 can still result in serious violations and punitive consequences for employers.

Correcting Mistakes in the Wrong Way

Making a mistake on a Form I-9 is not uncommon, but it matters how errors are corrected. Any form using an agent such as White-Out is not acceptable and may lead to compliance violations. In most cases, the best way to correct a mistake on the form is to simply draw a line through the incorrect information, add the corrected information, and then initial and date the correction.

Failure to List the Date of the First Day of Employment

The Form I-9 is comprised of three sections, each of which have their own set of deadlines that largely depend on the exact date of the employee’s first day on the job. Leaving this field incomplete or blank can be a giant red flag in an audit because it is the benchmark for which much of the subsequent deadlines are measured against.

The Form I-9 requires an employee to present the employer with documents for identification and work authorization purposes. The form clearly states that documents from List A, List B, and List C may be appropriate depending on each employee’s unique circumstances.

Beyond that, employers are also required to verify the authenticity of those documents in good faith and to the best of their ability. Should an audit reveal that fraudulent documents were used, knowingly or unknowingly, it can result in serious consequences.

All employers are required to have a completed Form I-9 on file for every employee. These forms should be easily accessible in the event that a government agency requests them, in which employers have three days to produce them. If it is discovered in an audit that a Form I-9 has been misplaced, the error can be considered a compliance violation.

In an effort to remain I-9 compliant, it is important for businesses to be proactive in learning about the top errors people make on I-9s and prevent making those same mistakes. Additionally, an electronic I-9 tool can reduce errors, significantly reduce the burden of tracking expiration dates, and significantly increase compliance.

Have New Hires? Ice Audits? Get Compliant Stay Compliant. Ask How We Can Help